The authors of The Drop-In are locked in the vice-grip of final tests, projects, papers, you name it, along with the rest of the MLML community.  But the holiday break is approaching as quickly as our wandering attention spans.  For a welcome distraction and a bit of good cheer, we invite you to vote for the best holiday-themed marine creature!

Of course, you want to be an informed voter, so meet the contenders: 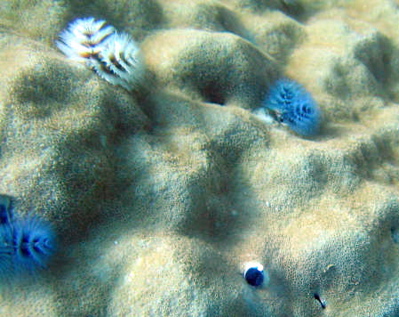 The name says it all, really.  This colorful polychaete (worm) spends its life bored into a coral, and extends its twin spiral plumes to filter-feed on passing plankton .  Like Old Navy sweaters, they come in a variety of colors, from orange and yellow to blue and white.  But if you pass a shadow over them, they may retract faster than your camera’s shutter (like the lower right of the photo)! 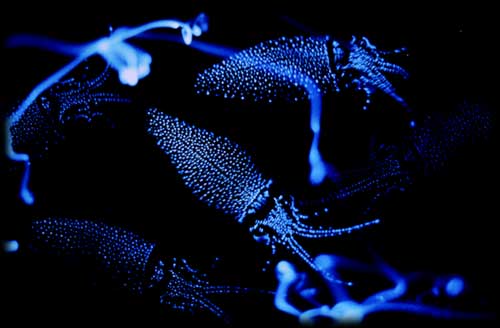 Also called the the Sparkling Enope Squid, this three-inch marvel lives in the Western Pacific and packs a bioluminescent punch that rivals the light decorations of your most zealous neighbors. Their spectacular seasonal display is a tourist attraction and a natural monument in Japan!

Ok, the other contestants may cry foul for nominating an entire phylum, but there are  too many cool comb jellies out there to choose just one.  And a photo doesn’t do them justice either, because they are the equivalent of those “running” Christmas lights.  Watch this video from the Vancouver Aquarium (if you can handle the cheesy sci-fi music…) to see the twinkly action!  Comb jellies are also called ctenophores, and unlike true jellies (Phylum Cnidaria), they don’t have stinging cells, just lots of little hairs that defract light in really cool ways!

Bamboo corals may have more than 8 branches, but their candelabra shape made them a prime candidate to represent Hanukkah. (They also belong to the octocorals, because each of their little polyps has 8 tentacles!)  This particularly beautiful representative was discovered by a team including Peter Etnoyer of the Deep Sea news!  They found the deep-sea coral living on seamounts 700-2700 m deep in the Gulf of Alaska.  Learn menorah about this cool new species at the Deep Sea News, including a video of its discovery!

It’s red, it’s green, it looks like it should be dangling from your tree, it’s sometimes called the Christmas wrasse, and it’s even found at the Christmas Islands.  This little tropical darling clearly has a lot going for it, besides being the only vertebrate of the bunch!

6 Responses to Vote for your favorite holiday marine creature!