Celebrating the Art in Seaweed Science 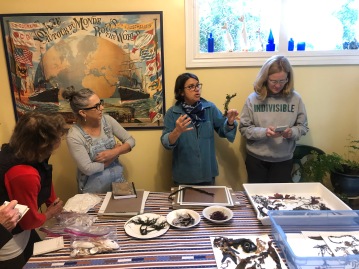 SCIENCE often brings to mind measured and exact descriptions. But, often the process of conducting science requires curiosity, creativity, and a willingness to take an experimental risk. Qualities that are more often associated with art. Perhaps, unsurprisingly, these two fields collaborate more often than expected. A local artist, author, and phycologist, Josie Iselin, recently held a workshop at her studio where participants could explore the collaboration of seaweed science, art, and a little bit of history. 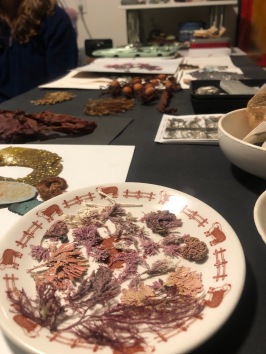 Different species of seaweed that were used in art and print making for the workshop.

The colors and textures of seaweed create a kaleidoscope of diversity along California’s coast that has drawn artists and scientists to the shore for decades. To preserve these species for study, they are usually pressed and dried. But preserving specimens in this way makes them difficult to incorporate into an identification manual. Photography, illustration, and printmaking offered solutions to this problem. In the early ages of photography, a type of print making, called cyanotype printing, began to expand how field guides could be created. Today, high color photos in books and on our phones or apps like iNaturalist make identifying and enjoying our beaches very easy. However, these classic techniques of pressing and printing are still valuable to studying seaweed.

Joise’s workshop focused on the cyanotype printing technique. Cyanotype prints are made by coating thick paper with two chemicals that react when exposed to sunlight. Objects, or seaweed, are placed on the paper. The sunlight reacts and turns the exposed paper a deep blue, and the paper covered by the object remains white. The paper is then rinsed in a water bath and dried flat. Simple straightforward process, except of course the weather, the day of the workshop it was raining in the Bay Area.

Under Josie’s kind and attentive guidance, we began a cyanotype first: experimenting under rain conditions. We began by placing delicate fronds and branches on paper. To protect the paper and seaweed from the rain they were placed under glass before being placed on a flat outside surface. It took between 20-40 mins for the print to develop, but it worked! Producing the prints in the rain resulted in some varying hues of blue, abstract shapes, and some beautiful pieces of art from the combination of sun and rain. The contrast of the white and blue reveal the playful and unique shapes algae and marine plants create. 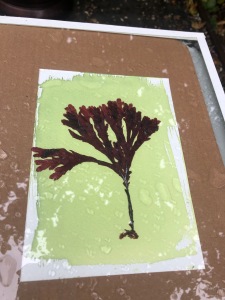 Despite the rain, enough sunlight was able to get through to react with the cyanotypes and create these dark blue prints.

To learn more about the history, science, and art tied up in seaweed explore Josie Iselin’s new book The Curious World of Seaweed, released in August 2019.

This entry was posted in Cool Resources and tagged art, phycology, seaweed. Bookmark the permalink.